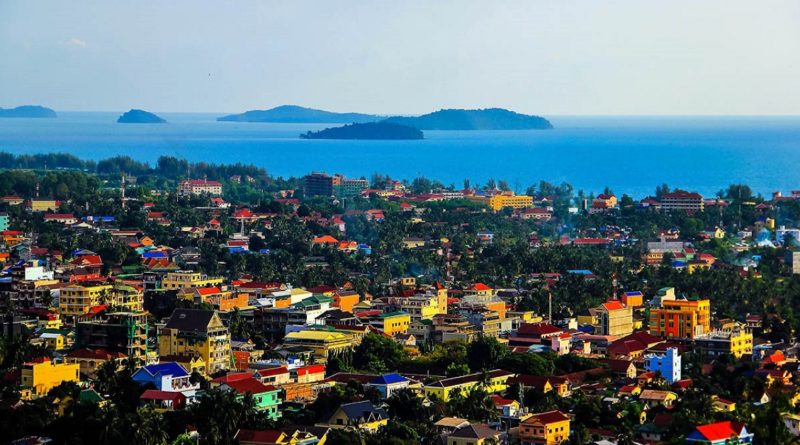 Sihanoukville is situated approximately 150mls from the capital city of Phnom Penh, in the Gulf of Thailand, with Vietnam to the East and Thailand to the West.

The Moscow conference had been very successful but also very demanding on Zhen Li. It had been very useful to catch up on the progress of the business sectors and the Zodiac Program which would be a major income generator in the future. Kirill had provided substantial and comprehensive data reports on all aspects of the organization which had been growing rapidly over the past decade.

China was expanding rapidly both internally and externally the influence and control over South East Asia was becoming more apparent by the year. This growing influence meant significant opportunities over the whole region. Zhen Li had a great affection for the region and in particular the area of the Cambodia, Thailand and Vietnam Triangle where the organization was a major player in Real Estate, Brothels, Casinos, Manufacturing and Human Trafficking which supplied the slaves for all those sectors as well as domestic slavery and wives for the vast Chinese market where women were in seriously short supply after decades of demographic manipulation.

The Cambodia, Thailand, Vietnam Triangle had been and still is a remarkable and plentiful source for men, women and children who are ideal candidates for the many employment sectors of the organization both within the Triangle and further afield particularly to the Middle East.

The candidates are simply lured, kidnapped and sold into forced labor in agriculture, construction, factories and fishing vessels or domestic servitude and sex trafficking.

Zhen Li continued to be amazed by the scale of the operations and how easy it was to maintain the supply of suitable candidates:

Many of the operations in China depended on the constant supply of these vulnerable people and it was expected that a very high number of those lives would end in poverty and slavery.

There was more good news for Zhen Li, and this was in reference to the expansion along the Cambodian coastline with specific reference to the region around the coastal town of Sihanoukville. Sihanoukville aka “Snooky” is a province in southwest Cambodia known for its beaches, tropical islands and the mangrove jungles of Ream National Park. Set around a deep-water port on a peninsula jutting into the Gulf of Thailand, the provincial capital of Sihanoukville has palm-fringed beaches, seafood restaurants and late-night bars. Overlooking the capital is the hilltop Buddhist temple of Wat Leu.

As home to Cambodia’s only deep-water port and part of a vital trade route for President Xi Jinping’s Belt and Road development initiative, the city has become a focal point for Chinese investment. Vast Chinese run construction projects are visible across almost every area of the city and its’ high streets are now lined with a majority of Chinese businesses and restaurants. Prime minister Hun Sen’s willing embrace of Chinese investment, unlike neighboring countries Thailand, Myanmar and Vietnam, has ensured Cambodia is at the core of belt and road plans in southeast Asia. The southern coast of Cambodia is now home to $4.2bn worth of power plants and offshore oil operations all owned by Chinese companies. Beyond Sihanoukville, the Belt and Road money was also financing a new highway to Phnom Penh and a bigger international airport in the capital.

The organization had always ensured that it was heavily integrated at the highest levels in China’s Belt and Road Initiative which had taken hold of this city and was literally choking it with construction in a bid to make it a casino hub for Chinese tourists, over 30 casinos are specifically for Chinese Tourists and there are over 70 more under construction. Their interests of the organization included substantial investments into Casinos, Hotels, Residential Real Estate, Infra-Structure Construction, Factories and Retail Outlets.

Ironically, Cambodians are not allowed to enter Sihanoukville’s casinos unless they are employed in them.

While the influx of big-spending tourists has had some positive economic impact on the once quiet city, the boom has also transformed Sihanoukville into a big, unregulated, dusty construction site where concrete trucks tear down muddy potholed streets 24/7 along with thousands of Chinese labourers who work around the clock.

Cambodians aren’t welcome here and are being systematically squeezed out of their own town by a closed economic loop in which Chinese tourists patronise only Chinese-owned businesses who prefer Chinese workers which means that locals are being cut out of the action which has resulted in hundreds of Cambodian family-owned businesses being closed and thousands of tenants being driven out of their homes.

The region now has a major crime wave which is blamed on Chinese tourists and Chinese expatriates living in Sihanoukville which includes shootings, assassinations, kidnappings, extortions and brawls. The mass influx of those Chinese tourists has also created opportunities for Chinese mafia to come in and commit various crimes and kidnap Chinese investors, causing further insecurity in the province.

The data on the region was looking very promising and her efforts had ensured impressive influence across the Chinese Political Spectrum which was maintaining full support across all aspects of South Eastern Asia whilst supporting the established interests within China itself. The future looked good, but there were always hurdles to overcome, but the population was booming and the demand for slaves across all sectors was reaching a potential crisis. Hong Kong was fighting back and had to be quashed, harsh measures needed to be taken to ensure full government support. The pro-government hit squads had been effective and there was no trace back to the Party in Beijing.

The comprehensive data was supported with action plans for all aspects of the modern slavery markets and she read through the details making notes. There were always better ways of doing business, the world was changing, getting faster and more complicated and the work on the ground had to keep up with fresh ideas and new partnerships.

Zhen Li needed to study some of the candidate caseworks, not out of curiosity but as a financial analyst. There were plenty to choose from and she wanted to establish best practice and methodologies that would or could maximize the returns for the organization. The notes included some of the following data:

Slavery and Human Trafficking in Cambodia:

The numbers were impressive as the industry was bigger than the arms and weapons trade. It is more lucrative than drug smuggling and is only surpassed by the oil industry in magnitude and revenues. The industry attracts very little publicity unlike in the West if the victims are young, attractive and white. It is the most profitable industry in South East Asia, but that would be open to interpretation.

In Cambodia, women and men, children and old people alike are trafficked every day. Some are abducted and sold into forms of slavery for as little as $30. Others pay hundreds of dollars to people-smugglers who promise them a better, brighter future somewhere else. Almost all end up in precarious situations, exploited by rich and powerful trafficking lords.

Young girls are brought from the provinces to brothels in Phnom Penh and other major cities/towns. Vietnamese girls are bought to join their Cambodian sisters in the brothels and Eastern European women are lured into working as nightclub escort girls.

Usually the girls are from rural areas where the traffickers have well established local networks and deploy recruitment advisers throughout various villages. 75% of the girls are tempted with offers of jobs with a high pay in the city and don’t know they will go to a brothel. 20% of the girls are sold to the brothels by their parents or close relatives, poor families do it usually for the money or their boyfriend and 5% had been kidnapped or sold by a boyfriend.

Sometimes the parents pay for their daughter’s transport to the town, sometimes the pimp pays. Upon arrival at the brothel most girls refuse to have sex with the customers, so the brothel owner and mama-san start to “break in” their new arrivals. The girls are locked up and threatened, they get no food and most of them are beaten. Then they are often sold to a rich man for a whole week. Some customers pay up to $500 to $700 for a week. After that the price for sexual services drops to $2 to $5 a trick.

The traffickers themselves get paid by the brothel owners. The traffickers have well established local networks in the provinces, deploying recruiters in various villages.

Vietnamese girls are bought to join their Cambodian sisters in the brothels and Eastern European women are lured into working as nightclub escort girls.

Having sex with a virgin is greatly prized in Cambodia. Many Cambodian men believe that deflowering a virgin will bring good luck, prolong life and eliminate any chance of getting AIDS. Young women are expected to be virgins when they marry.

However Problems were Looming in this Sector:

The less attractive girls who are able-bodied end up as domestic servants and usually find themselves in abusive and slave-like conditions. This sector was booming as the middle class was thriving and they demanded more leisure time and all-inclusive services.

Zehn Li recognized that this sector was very much an untapped market and the rewards were higher than the brothels.

However this Sector had other Issues:

Children as young as three, Elderly and Handicapped people are smuggled to Thailand to work as organized beggars. The beggars are then starved, beaten and tortured and made to appear scruffy and pathetic then kept out on the streets late into the night and then hand over the money to their guards. Some of the children are deliberately disabled by polio injections or maimed by acid.

Although the street beggars are deemed part of everyday life, they do make substantial returns and Zhen Li had statistics on where and how they would be most profitable, and they included details on:

Chinese laborers are imported to Cambodia for sweatshop factory work and construction work.

Zhen Li knew the best approach for these two sectors was to ensure the staff were always trafficked foreign workers who then lived in specific accommodation and under strict conditions:

Zehn Li studied the papers on the long journey homewards and smiled, life was good and getting better!